One of Australia’s leading camera/Steadicam operators, Peter Barta, talking about how he got started with Steadicam, and further thoughts on choosing equipment: 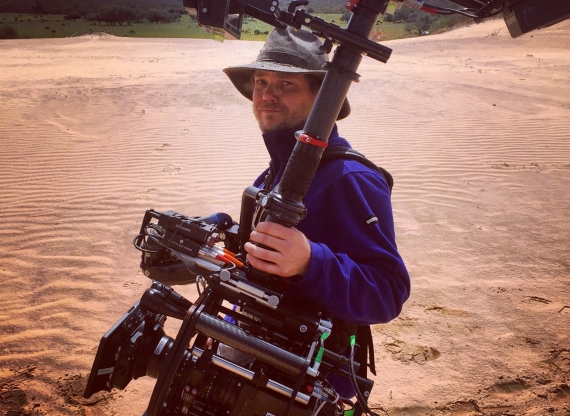 “My Steadicam fascination began when I was around 15yrs old and from there I began learning everything i could about this amazing tool. After completing a course with Garrett Brown, the Steadicam inventor, I began working in television and commercials & ultimately film, where I’m continuing to forge my career as an A camera / Steadicam operator.

If I was given any form of advice when I first started my career it would be to choose wisely when it comes to equipment. Over the last 20 years I’ve tried and tested it all and so the advice that I can now hand on would be to go for the company with the best support.

In this role I’m heavily dependent on my equipment; the better it is, the better I can function, and after a few false starts I found ‘THE’ mother of all monitors, my trusted Transvideo. As a Steadicam operator, the monitor is your critical reference for all the moves you are making; your eyes, your brain, your muscles, are all working together to produce the shot, and your reference is that Transvideo monitor. Over time I have come to realise how much this company not only manufactures excellent products, but its support is second to none.

I recently found this out when my Transvideo CineMonitorHD6 X-SBL Evolution monitor, which I run on my new Steadicam M1 suddenly, and most unusually, stopped working. In the film and TV industry any holdups can result in major losses of time and money, so if anything goes wrong with the equipment you need to be able to rely on the company to get it fixed and back to you asap. With one email it was headed to France and fixed and back in record time. The shoot wasn’t impacted at all and I was super impressed. ” 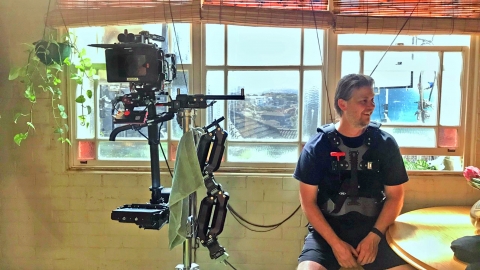 “Besides owning the CineMonitor I should mention the new StarliteHD monitor which I have added to my rig which is terrific as a Steadicam low mode monitor, which I absolutely love as it’s so small and lightweight.

Transvideo have been so supportive throughout my career not only with backing me up but by constantly updating their monitors making them more innovative, updating the software and listening to their customers. To me that’s the most important thing, communication with customers - understanding what my needs are, especially when in this industry when you need something you usually need it urgently. Being the camera / Steadicam operator really is the best job on set. I can honestly say having reliable backup from companies like Transvideo makes it the job all the smoother.” 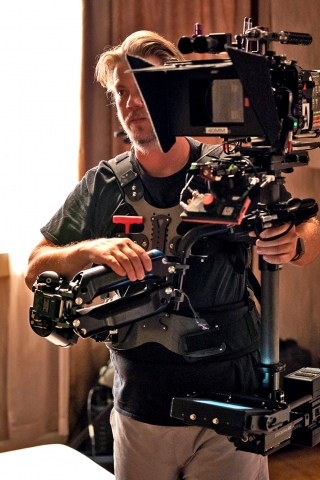 Shooting of Long Story Short in Sydney, Australia, in 2019

Peter says “All above photos taken during the shooting of Long Story Short in Sydney, Australia, in 2019, starring Rafe Spall and directed by Josh Lawson. I did A Camera / Steadicam and it was ALL shot on Steadicam!!!!! My first film all shot on Steadicam. It was hard work.”

Latest news from Peter:
“I’ve been very fortunate in that I’ve been able to keep working through Covid.
I first worked on Children of the Corn with DP Andrew Rowlands & then 2U.
Then I got lucky and have been working on a documentary for Amazon Prime about the Aussie AFL footy which continued through Covid making it an interesting documentary similar to Last Chance U on Netflix.”