Junior Agyeman Owusu is an up and coming camera op / Steadicam operator based in the UK. He has high ideals, a strong work ethic and a will to succeed. His career path could well be an inspiration for others starting out in the production world. 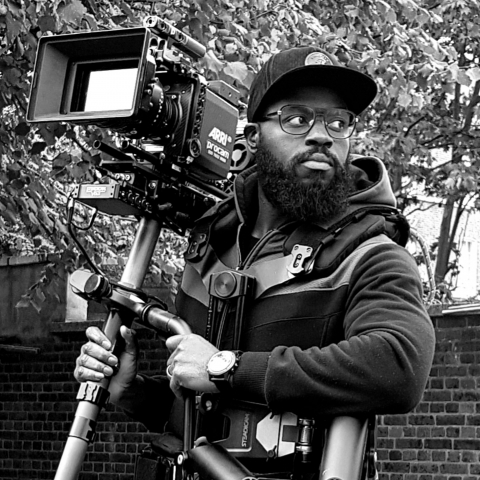 Q: Was there anything in your youth that led you towards your present career?
Junior: In the environment that I grew up in I was always looking for some kind of escape, and films became that escape. On screen was an array of different worlds that immersed me in a creative vision, and in that world I had no problems.
It was all pretty much cinema. Anything I could get my eyes on, cinema in particular, was magical.

Q: What happened next?
Junior: I was 18 and in the Air Cadets, planning to become a pilot. I was going into the RAF and was about to apply to become an officer, but then I did a short film course via the Air Cadets. It reminded me, and made me realise that what I really wanted to do with my life was to pursue my love for film. So I did a complete U-turn and went straight into university and studied film. Three years later I earned a BA in film making.

Q: What follows?
Junior: I needed to start earning, and got a job as a professional photographer, travelling the world taking photos predominately for high end weddings with some corporate, and that got my feet on the ground. I was able get my own place and get myself together. That took about two years, and then I came back into film as a camera trainee, but I started lighting, sparking, working mainly with one or two people that took me under their wing, and I learnt the ropes under them.
When the productions became bigger, the availability of other lighting roles like best boy and gaffer came about. So I got more established as time went on with a solid background in lighting. 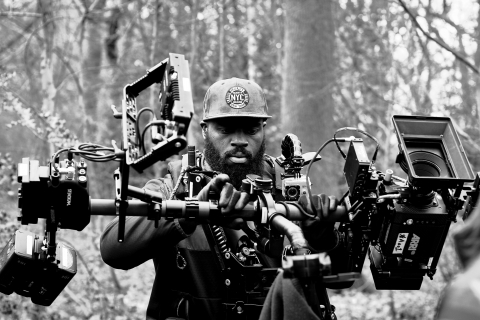 Junior Agyeman Owusu it's all about balance music video in London

Q: Were you enjoying all of this?
Junior: Oh yes! I only do what I love, that's one of my mandates, and I loved it. You're learning all the time as you go along. You're surrounded by people with talent, skills, and devotion.

Q: What led you to Steadicam?
Junior:I was working on a big Bollywood production in London, it was massive. I was gaffer. We had 21 sparks and there were lights everywhere. There was a Steadicam op, Oliver Hickey, and we got talking. He was actually on his way out, retiring. He explained to me the options that were available, and that I hadn't considered. I was now at a stage where I wanted to push up in the career ladder, the type or quality, or fundamentally the size of productions that I was doing. It was challenging. It wasn't the easiest journey to get to where I could command the respect of my peers and DOPs who would take me on as gaffer. And I was getting to a point where I couldn't give creatively as much as I knew I could give, and I knew I couldn't do it within the confines of lighting.
It was becoming clear that the time was right. Oliver was explaining his experience of Steadicam and his evolution, how self contained he was and how he was able to live a certain quality of life, coupled with being able to give so much creatively, and the intensity that demands. That excited me. It's why I fell in love with film.
We spoke about the best way I could start this journey, and he mentioned that Tiffen ran workshops several times a year which would give me a snapshot and essential training. When the opportunity came for me to take the Steadicam workshop, I jumped at it.

Q: When anyone visits your website they come across the mention of extreme fitness and sports activities that you're into. Is there a relevance in those to your career as a Steadicam operator?
Junior: Yes, it's a big influence. I'm a big appreciator of movement, and I love how the human naturally moves. I love counteracting. If you understand how to position your feet, or you move your hips a certain way, you can get more power and control things better. So when I'm operating, I'm using all these different elements that have helped me take more control of my life and have a better balance, which in turn I bring it into my work. I can mix everything together and create a beautiful shot. 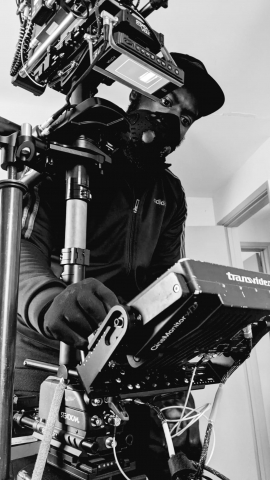 Q: I know that you had some early issues with finding the right monitor for your rig.
Junior: Early on I had some problems in getting the video feed from the film cameras I was using into my monitor, but then Danny at Tiffen loaned me a Transvideo CineMonitorHD to try, and all the problems instantly went away so I immediately ordered one. It’s enabled me to have a greater dynamic balance because of its weight, especially with my light sled. I could access the menu system much quicker, and the super brightness meant I was good to go in every condition.

The battery voltage indicator, the virtual horizon, the perfect weight, the easy user interface, the robustness and its amazing signal options and inbuilt tools all give me confidence when using any camera from film to digital. These properties are vital for me as without a reliable monitor, my job is harder.
On set, there's so much pressure. You may be waiting for hours and then you get your shot. The monitor is my only reference, and an instrument I rely upon to compose my shots, so I can’t have my screen playing up in any way. Having the right monitor has made a massive difference.
A great investment, solid and reliable, the CineMonitorHD is the only monitor I would use.

Q: You talked to me about mentoring, which I’ve heard about via American operators, but not from a British one till now.
Junior: Yes, mentoring. I'm a product of other people and how they've either invested in me by giving advice or help, building me up into the person that I've become. I've learnt that creating or sustaining that culture of nurturing, developing, and helping somebody find their feet is really important. When I was on my way up, there was one particular person, Grant Sandy Phillips, a Steadicam operator, who gave me a lot of advice and even a few jobs which were pivotal in my development, my understanding, and my confidence in being a Steadicam operator.Another operator, Peter Robinson, has given me invaluable insights. He's been in the game for a very long time, and just listening to him talking is illuminating; and of course Steadicam op Oliver Hickey helped me with that conversation that led to the Steadicam workshop. I have to acknowledge all these people that have helped me. Also, I do my best to push to have an assistant, not to necessarily help me out, even though by default they will, but to create or give them exposure to the film word. 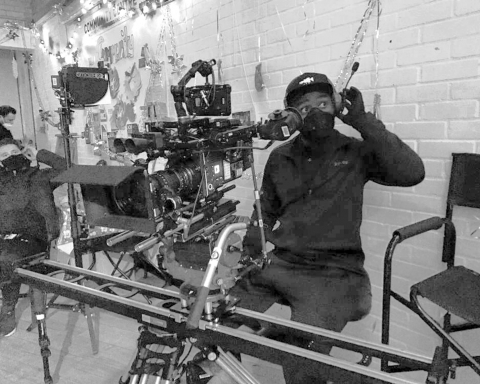 Q:One thing you mentioned was that a lot of the Steadicam work you'd been doing over the past year or so was for people who are making short films in 16mm film, I didn’t realise that was going on.
Junior: Yes, I do a lot of work with NFTS, the National Film and Television School. They're quite renowned for the calibre of people they turn out going on to do quite big things. They are really active and they're constantly creating a lot of material like short films.A large majority of these are shot on film, which is rare, so for me to work with up and coming talent, especially DOPs who’ve never used a Steadicam op before and want a dynamic shot, is great. I'm at a sweet spot because I'm willing to facilitate, I've got a wealth of experience, and so it's mutually beneficial.

Q: Where do you see your future now?
Junior: My goal is to work predominantly in the narrative sphere, to include TV drama and feature films. That's the epitome of where I want to be. It was those projects, after all that inspired me to start this whole film process in the first place.

STOP PRESS: Message received from Junior after the interview, December 2020:
“Since doing this interview I have now landed my first feature film working with DP John De Borman BSC AFC. For me this is a dream come true plus being a reflection of the years I have devoted to developing the craft to the point that I can perform to the level that such DPs expect.”